Donald Ross designed an 18-hole course about 1919 for use as a private course by the John Pickering family. During WW II Cliff Realty Corporation was formed and purchased the course in 1949. At the time the Club stood as one of Maine’s top 18 hole layouts. About 1950, during the Eisenhower Administration, the club encountered financial problems and reluctantly chose to abandon nine holes. For the next 50 years the Club operated as a 9-hole course.

In 1997, the shareholders decided to explore the restoration of the abandoned 9-holes. Because much of the old course was in what today are federally defined “wetlands’, restoration of the old course was not permissable.  The Club then engaged course architect, Brian Silva, an avid student of Donald Ross. The design team evaluated nine different course layouts before selecting the course that was built. The team agreed at the onset that the new holes should mimic the old holes and reflect Donald Ross “feel”. In 1999 the reconfigured course opened as a semi-private course to rave reviews. All who have played the course believe we accomplished our goal and the course is one of the most attractive and interesting in Southwestern Maine. Also during the 1998-1999 period of renovation the club installed a new irrigation system, storage ponds and wells thus insuring a green course all of the summer. Finally, during this period the Clubhouse, including the Cape Neddick Pub & Grill, was renovated to its present 6,000 Square Feet.

The Club has approximately 325 golf memberships and approximately 26,000 rounds are played during the Club’s mid-April to early-November season

We believe CNCC offers every level of golfer a challenge to every shot and club in the bag. We have a full practice facility with driving range and two USGA spec putting greens. Our Golf Professionals offer private lessons, clinics, as well as full club fitting and club repair on site. Our staff is inviting, friendly and helpful, and our food and drinks are fun and delicious. We are minutes from two of the finest beach resorts in New England, and yet our atmosphere is quite and feels remote. If you haven’t tried our course, you should because all who do keep coming back.

History of our Golf Course

The history of Cape Neddick Country Club starts in 1900. Our story is about family and friends as much as it is about golf. Family members and friends who gathered for summer fun on the Cape Neddick estate of John Pickering. In 1900, John put in three holes of golf as a way for all ages to engage in an activity to compliment the beautiful weather, coastal air, and delicious al fresco family style dining – all beginning with a “haven-faven” (better known today as a strong gin and tonic!). It was here that Cape Neddick style was born — genuine friendship, laughter, good conversation over meals, and lots of competitive golf games to boot. Ahh… life’s pleasures all in one place.

Over time, the popularity of these summer outings resulted in three short holes expanding to six and then, at the time of the United States’ entry into World War I, to nine holes. Pretty impressive for a layman like John to manage this development! But soon he realized that a capable, experienced golf course architect could expand and enrich the course, enabling him to share an even better experience with his intimate circ

In 1919 the little club was incorporated as Cliff Country Club, with the then well-respected (and now legendary) golf course architect Donald Ross directing the plans to lay out a full 18 holes. Complete by 1925, Ross’ expansion became an attraction for many summer visitors to Ogunquit and York, as well as for John Pickering’s friends and the local artists and business owners who wished to support the club and practice the growing sport of golf. We delight in hearing the folklore passed down from generation to generation of how well the club was received and regarded. Richard Boardman, a long-time member of the club and caddy from 1925 to 1940, remembers well the “good ol’ days,” including a caddy strike lasting one whole day. Imagine: The caddies wanted to raise their wages from 50 to 75 cents per 18 holes!  As John advanced in age he took steps to preserve the legacy of the club that meant so much to so many. He asked a group of his friends, who summered in the Ogunquit-York area, to invest in the property. In 1949 fifteen of those friends bought the property and formed Cliff Realty Corporation, which has continued to own and operate the golf course to the present. Descendents of the original shareholders still make up a majority of club shareholders today, and family members of the founders continue to golf here with their children and grandchildren, passing on the love of golf and family as John had intended. 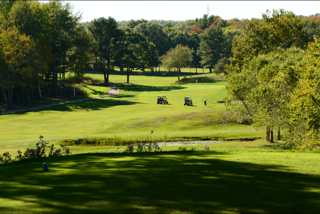 In 1990 the club was renamed Cape Neddick Country Club to reflect its location and the beauty of Maine, and soon the owners decided to update the clubhouse and invest in major improvements on the course. The group hired the renowned Brian Silva, who played and loved the course as a local summer boy and won the prestigious Golf World Magazine’s Golf Course Architect of the Year award in 1999. Silva laid out an additional nine holes to replace the part of the original course that could not be maintained after the start of World War II. Silva worked to preserve the Donald Ross style, making use of the earth’s natural contours and laying out simple yet diverse challenges, enjoyable for all classes of golfers. Notable also are the manageable walks from green to tee and the absence of residential development. The course is truly modern, yet a welcome oasis from noise and hubbub, where the lovely smells of the ocean and freshly mown grass dominate the golfers’ senses.nded.

The most important element of Cape Neddick life has not changed over the decades: Cape Neddick Country Club lives up to its reputation year after year—members, guests, and daily players who can’t wait to experience a shared love of pristine golf, old traditions, gorgeous weather, and friendliness to all who love the game. We invite you to enjoy and share with us the quiet undeveloped solitude of Cape Neddick Country Club. Take a walk in the woods and experience golf on the coast of Maine!

Thank you for sharing your day with us.